Biden withdraws US support for Saudi Arabian offensive in Yemen – 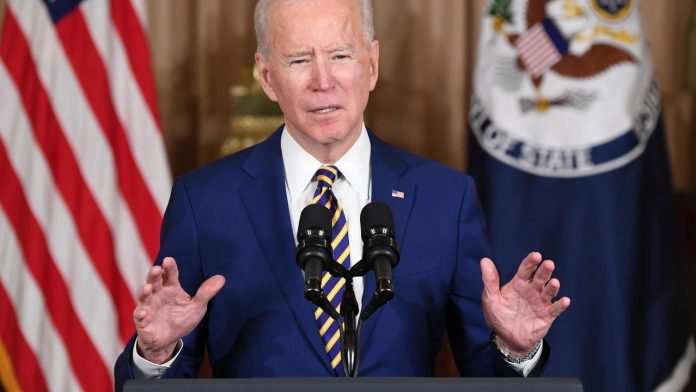 President Joe Biden announced on Thursday that the United States is ending support for a groundbreaking five-year Saudi military offensive in Yemen that has deepened suffering in the Arabian Peninsula’s poorest country and called for the move to restore a US focus on diplomacy, democracy and human rights.

“The war has created a humanitarian and strategic disaster,” Biden told diplomats during his first visit to the State Department as president. “This war must end.”

The Yemen turn is one of a series of changes that Biden presented on Thursday that he said would be part of a course correction for US foreign policy. This is after President Donald Trump – and some Republican and Democratic administrations before his – often helped authoritarian leaders abroad in the name of stability.

The announcement about Yemen fulfills a campaign promise. But it also shows that Biden is focusing on a major humanitarian crisis that the United States has helped to exacerbate. The reverse policy also comes as a rebuke to Saudi Arabia, a global oil giant and the US strategic partner.

The end of US support for the offensive will not affect any US operations against the Yemeni-based al Qaeda in the Arabian Peninsula, or AQAP group, said National Security Adviser Jake Sullivan.

Biden also announced an end to “relevant” US arms sales but gave no immediate details on what that would mean. The administration has already said it is pausing some billions of dollars in arms deals with Saudi Arabia and the United Arab Emirates, Saudi Arabia’s main partner in its Yemeni offensive.

While withdrawing support for Saudi offensive operations in Yemen, the Biden administration said it intended to help the kingdom increase its defenses against further attacks by Yemen’s houthis or external opponents. The insurance is seen as part of an attempt to persuade Saudi Arabia and other fighters to end the conflict overall.

Saudi Arabia’s top officials did not respond immediately. They have offered a series of conciliatory gestures and remarks since Biden’s election, with the aim of calming the 75-year relationship with the United States.

Yemen, the biblical kingdom of Sheba, has one of the world’s oldest constantly occupied cities – the more than 2000 year old Sanaa – along with clay brick skyscrapers and disturbingly beautiful landscapes of steep, dry mountains. But decades of Yemeni misgovernment have exacerbated factions and halted development, and years of conflict have now dragged into the intervention of Saudi Arabia, the United Arab Emirates and Iran, which officials say has provided increased support to the Houthis.

The Obama administration in 2015 gave its approval to Saudi Arabia, which led a cross-border air campaign aimed at the Houthi rebels, who had seized Sanaa and other territory and sporadically launched missiles into Saudi Arabia.

The United States, which focuses on Saudi Arabia’s leadership and control, was intended to minimize civilian accidents in airstrikes. But in Saudi-led strikes since then, many Yemeni civilians have been killed, including schoolboys on a bus and fishermen in their boats. Survivors show fragments showing that the bombs are American.

The Saudi-led campaign, which primarily joined the United Arab Emirates, another Gulf country, has only “kept a civil war in Yemen” and “led to a humanitarian crisis,” Sullivan said. U.S. officials have already announced senior officials for those two countries to explain the rationale for withdrawing support, he said.

The stalled war has failed to free the Houthis and is helping to deepen hunger and poverty. International rights experts say both the Gulf states and the Houthis have committed serious rights violations.

Yemeni activist Tawakkol Karman, a winner of the 2011 Nobel Peace Prize for his role in Yemen’s failed Arab Spring uprising, called on Biden to remain involved in Yemen.

“Deeper US involvement – and the refusal to go along with dictators who have chosen bloodshed over democratic change – is crucial for the Yemeni people to return to the democracy project,” Karman said in a statement. .

On Thursday, Biden called for a ceasefire, the opening of humanitarian channels to enable more aid delivery and a return to long-term peace talks.

The week-old Biden administration has made it clear that a priority was to shift its stance towards the Yemeni war and towards Saudi Arabia over the Yemen offensive and other rights violations. Other measures have included a review of the Trump administration’s categorization of the Houthis as a terrorist group. Critics say the term hinders the delivery of humanitarian aid to Yemenis.

Biden also announced the election of Timothy Lenderking as special envoy for Yemen.