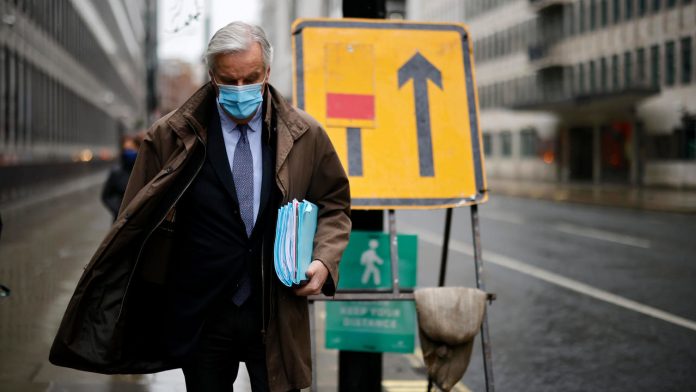 European diplomats warned on Thursday that they had made every concession they could in trade talks with Britain, as Downing Street promised to move forward with a British law that could undermine Brussels’ remaining confidence in London.

EU chief negotiator Michel Barnier has been in London for six days, trying to reach a difficult compromise with his British counterpart David Frost and draw up a trade pact that can be ratified within a few weeks.

“We are at the end of a marathon, probably over 40 kilometers (250 miles). But there is still a small step left,” said Barnier adviser Stefaan de Rynck during a debate at the European Policy Center.

As the finish line approaches, the mood in Brussels, with some of the EU’s 27 member states – led by France and the Netherlands – worried that Barnier would shake hands with something that in their opinion gives up too much land to a country quit the club.

An EU diplomat insisted that Europeans remain united, but warned that it was clear that Barnier “was millimeters away from the red lines” he received.

“I think it is quite clear that right now we have reached a point where we are so close to the limits of our mandate that we need a movement on the side of the UK if we want to hit a deal,” he said.

“I do not have the impression that we are hours away from a business … what needs to be bridged is still quite large,” the diplomat added.

Negotiators are working day and night to agree on an agreement in time to be ratified before 31 December, when the UK will no longer be bound by EU internal market rules under the terms of a post-Brexit transition.

A European source with close knowledge of the negotiations said talks would continue on Thursday “and no doubt on Friday.”

“Everything can change at any time,” the source said, adding that the sense of urgency “was now understood in London”.

#Brexit | Ireland and France totally unite in the defense of European interests, particularly those of our fishermen – with the Minister of Foreign Affairs @simoncoveney 🇮🇪🇪🇺🇫🇷

Ireland and France are fully committed to defending EU interests – especially when it comes to fishing pic.twitter.com/OnkaIszPrH

A British government source said the EU had included “new elements” in the negotiations. “A breakthrough is still possible in the next few days but the outlook is on the way back,” the source said late Thursday.

Barnier can inform EU members on Friday afternoon, but the meeting has not yet been confirmed, says a European source.

“Our focus remains and will continue to be on trying to secure a free trade agreement.”

But number 10 also confirmed that it would move forward next week with a plan to enforce internal market legislation, a bill to steer British business after it leaves the EU’s internal market.

Johnson admits that clauses in the bill would violate the exit agreement he signed with Brussels, and EU officials have warned that it may be impossible to ratify a trade agreement if he remains.

The House of Lords, the UK’s upper house of parliament, abolished the abusive measures – which Brussels fears violate a promise to establish a customs border in the Irish Sea – from the bill.

But the spokesman said: “Our position is unchanged. We will repeal the Lord’s defeat and reinstate these clauses.”

Irish Foreign Minister Simon Coveney, on a visit to Paris, said an agreement would be possible in the next few days as long as European nations “keep our nerve”.

Negotiations to determine the future trade relationship starting on 1 January are currently stalled on three key issues – fisheries, regulatory issues and the governance of a future pact.

Coveney said he hoped an agreement would be reached but that there would be no “extensions” and “no extra time” after January 1.

>> Irish Foreign Secretary on Brexit: “We will not hit a deal at any cost”

But both EU member states and the European Parliament must ratify all agreements reached between Frost and Barnier and their leaders Johnson and EU President Ursula von der Leyen.

French Prime Minister Jean Castex was in the Boulogne canal port on Thursday to promise French fishermen that they would not be abandoned if they lose access to British waters.