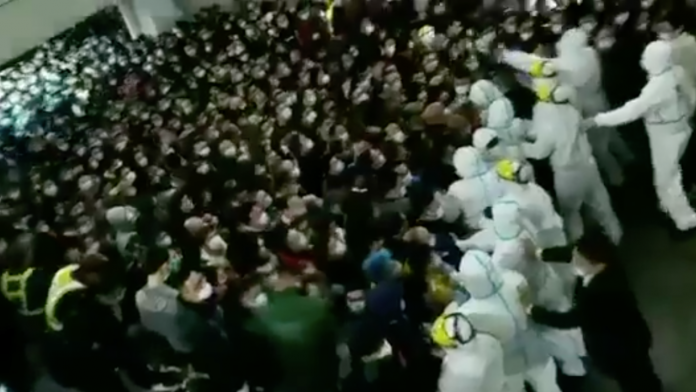 Viral videos show scenes of chaos at Pudong Airport in Shanghai on November 22, when officials tried to keep workers in place for testing after the discovery of two new Covid-19 cases linked to the airport’s cargo handling department. Tensions eventually calmed down and medical workers were able to test 17,719 cargo personnel between Sunday night and Monday morning.

To include a cluster of seven cases originating from the airport’s cargo area throughout the month of November, Shanghai municipal authorities ordered the closure of the airport and testing of all cargo workers at temporary stations set up in the airport’s parking garage on Sunday night.

However, these measures caused chaos and panic among airport workers. Videos shared on Weibo, China’s response to Twitter, showed authorities in white hazmat suits trying to contain hordes of people for testing.

In a Twitter video from November 22 published by the Chinese-Australian artist Badiucao, the crowds shout in a parking garage at Pudong Airport in Shanghai as the authorities try to drive them back.

Another video shows a closer look at the crowds trying to break away from the authorities holding them. A woman in the background exclaims, “Oh my God, they’ll start fighting.”

The caption of this November 22 Twitter video reads: “Nucleic acid testing at Shanghai Pudong Airport has caused chaos. The crowd is led and besieged like pigs. ”

According to this video, someone in the audience also fainted during the uprising. A man trains his smartphone on a stretcher and says that the authorities carry the person out of the parking garage.

When the tensions spread, the testing began overnight

As the situation approached its tipping point, the authorities seem to have managed to disperse tensions and restore order, although it was not clear what caused the change.

China Press, an influential Chinese newspaper in Malaysia, reported that due to the influx of staff, workers were asked to return to their stations to wait to be tested.

Near midnight on November 22, the official Weibo account of the Shanghai International Airport Public Security Bureau published photos of organized queues in the airport’s parking garage and of workers being systematically tested on the second floor of the P4 car park.

Cargo workers at Pudong Airport in Shanghai line up for the Covid-19 test on November 22 after a night of chaos. © Weibo

At a press conference the next morning, Zhou Junlong, Vice President of the Shanghai Airport Authority, announced that 17,719 cargo workers had been tested at 9.30am, that 11,544 tests had already been negative and that the remaining samples were still being processed. Officials did not say if the workers were allowed to go home or if they have been quarantined.

Zhou also said the airport authority would implement strict prevention and control measures in its cargo handling unit, where clusters of cases originate. This includes disinfection of equipment and spaces in the cargo area, regular testing of high-risk freight workers and emergency vaccinations for workers on a voluntary basis.

Nearly one million people in China have received an experimental Covid-19 vaccine that is still being tested but has been approved for emergency use in Beijing. Sinopharm, a Chinese drug group, claimed that there was not a single infection after vaccination and that only a few people experienced mild symptoms.

China Press reported that the crowd at Pudong Airport had dropped significantly the next morning when the airport resumed normal operations. A video released on November 23 by the Global Times, a Chinese media affiliated with the Chinese Communist Party, shows a quiet, airy terminal with passengers reaffirming their confidence in the airport’s Covid-19 controls despite the chaos the night before. However, the Washington Post reported that hundreds of flights to the airport on Monday were canceled, according to the flight tracking app UmeTrip.

Pudong’s airport transformation from chaotic to calm in a few hours is just one example of the Chinese authorities’ severe crackdown on any new Covid-19 infections. After sinking to almost zero, local cases have surfaced in several cities last week.

Following the discovery of five new cases in Tianjin, a coastal metropolis in northeastern China, on November 20, local authorities ordered mass testing of the residents of the city’s Binhai New Area, about 3 million people. The transmissions came from imported frozen products, the packaging of which turned out to contain traces of the virus. After other frozen foods in Xian, Jinan and Wuhan tested positive for the virus two weeks ago, Chinese authorities ordered broader testing and disinfection of imported frozen goods.

Authorities also closed the city of Manzhouli, located 3,000 km from Shanghai in Inner Mongolia, after two new Covid-19 cases were discovered on November 21. The next day, measures were taken to interrupt trains and flights and close roads and schools. City workers examined and isolated 194 close contacts between the infected individuals.