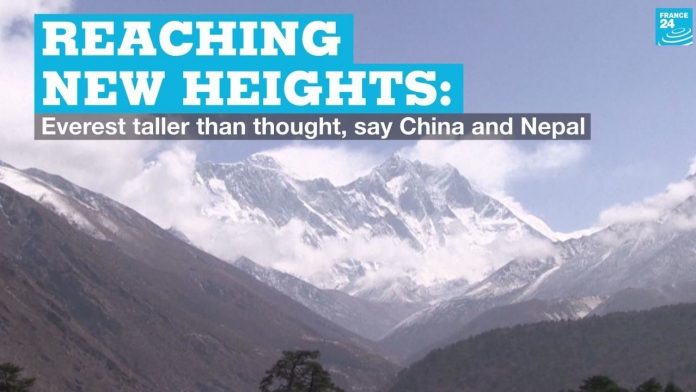 Mount Everest, the world’s highest mountain, has become even higher. It is according to new measurements taken by Nepal and China and revealed on Tuesday that ended decades of dispute between the two countries over the actual height of the mountain.

The new height of 8,848.86 meters (29,031 ft) is 86 cm higher than the measurement previously recognized by Nepal and more than four meters above China’s official figure.

Everest stretches across the border between Nepal and China, and the two have long struggled to agree on exactly how high the mountain really is.

Nepal had previously used an Indian measurement from 1953 and raised the altitude to 8,848 meters.

But that height included snow and ice on top of the mountain top.

China, meanwhile, conducted its own surveys, which only measured the mountain, and reached a figure of 8,844.43 meters.

Last year, Nepal decided to launch a new investigation into speculation that an earthquake in 2015 may have affected the height.

It sent about 300 experts and surveyors to take new measurements, a huge task that saw surveyors fetch 40 kg of equipment to the top of the mountain and spend hours in the cold to collect data.

China later joined the expedition and the final result announced on Monday was an average of the data recorded by Nepalese and Chinese laws.

“So today we end these speculations,” Nepalese Land Minister Padma Kumari Aryal said on Tuesday. “And with the goal of creating a single height in the world, we have completed this work.”