France announces sharp drop in women killings, but NGOs say it is too early to rejoice – 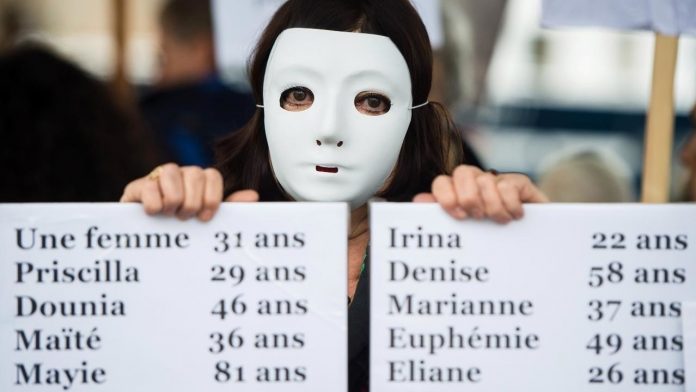 Ninety women were killed by their partners or ex-partners in France in 2020, which is a significant reduction from the 146 victims of femicide the year before, according to the French government. But French associations say it is too early to celebrate a reversal of the trend.

“Of course, every murder, every act of violence is a failure, with tragic consequences that we can only imagine. A failure for our entire society and a failure from the Ministry of Justice, he added. “The results are still too modest but they give a glimmer of hope.”

More than 200,000 women are victims of violence every year and in 2019, a woman was estimated to be killed by her partner or ex-partner every three days.

>> Jowharon feminicide: Our stories of violence against women

The figure announced for 2020 is the lowest in 15 years since the French government began counting. But associations fighting violence against women say it is too early to welcome this year’s statistics as some form of lasting trend.

“The circumstances in 2020 were most exceptional due to Covid and the lockdown,” said Céline Piques, spokeswoman for the group Osez le Féminisme (Dare to be a feminist).

“We will see if the figures are confirmed in 2021, but at present it is too early to point out the exact reasons for the reduction in the number,” Piques told FRANCE 24.

At the outset of the Covid-19 outbreak, women’s defense groups around the world warned of the growing threat facing women by being locked in with an abusive partner. The pandemic and the restrictions imposed to limit its spread highlight the violence to women and children at home, which led to an increase in reports of these incidents.

Justice Minister Dupond-Moretti said the significant drop in the number of homicides “undoubtedly is due to the perception that the whole of society has come to terms with domestic violence and these heinous crimes, and thanks to the work of NGOs”.

“It also depends on the measures taken by the Ministry of Justice to combat this violence,” he added, citing the introduction of several measures after the so-called Grenelle des violence conjugales, a conference on domestic violence involving a series of round tables. organized by the French government at the end of 2019 to find solutions.

Some of the measures taken after the Grenelle discussions include the deployment in September of electronic ankle bracelets equipped with geolocation technology, which issue a warning when a violent partner or former partner approaches a victim; the distribution of so-called téléphones serious danger – or emergency telephones for women threatened by violence – so that they can warn the police at the push of a button; and expulsion decisions that allow the expulsion of a violent spouse from the home.

>> Domestic violence: Electronic bracelets are a first step, but we need to go further

To put words to violence

But feminists warn against accepting government statements about the reduction in the number of murders and their causes at face value.

Piques agrees that there has been a change in society in recent years. The concept of “femicide” has already been recognized and integrated and we have stopped considering domestic violence as simple “disputes”, “scandals” or “passion crimes” – we hear less and less of that kind of rhetoric. This is really a cultural battle we are winning and it is very important, she said.

“For example, Osez Féminisme campaigned in 2014 on the term femicide, and everyone was laughing at the time. Today, politicians use this term, she said. “As a result, people have reacted differently to violence, especially neighbors and people in the couple’s circle, they are better equipped now to detect violence against women and put it into words.”

Piques also agrees that the measures taken after the Grenelle discussions are a step in the right direction. but “we see today that in terms of the number of protection orders or the number of emergency telephones, we are really just at the beginning of what needs to be a massive deployment,” she said.

France, for example, lags far behind Spain in implementing measures to protect women. Based on figures from 2019, Spain has issued many more protection orders than France, says Piques. “We do not yet have the figures [of measures implemented] from 2020. But if we listen to associations such as the FNSF (Fédération nationale solidarité femmes, or Women’s National Solidarity Federation), some more protection measures may have been introduced, but it is not at all systematic yet and the judiciary has not yet started distributing protection orders as they do in Spain , where they issue about 30,000 orders a year – as opposed to a few thousand in France. ”

Other measures are also slow to deploy: Only 1,260 emergency telephones were distributed to women at risk by the end of 2020 and 17 electronic ankle bracelets – of which only eight are active – were deployed in mid-January.

Domestic violence due to Covid-19

In the midst of the Covid-19 crisis, there are other factors that have not yet been measured but may have contributed to the reduction in the number of cases of femicide.

According to UN data published at the end of September, for example, lockdown led to increased complaints or calls for domestic violence to be reported worldwide, with an increase of 30 percent in France. Nevertheless, the number of women killed decreased.

“We know that a large proportion of women’s deaths occur after a separation or during the separation. And here we see two somewhat contradictory statistics: on the one hand, a very steep increase in violence, and on the other hand, an obvious decrease in women killing. So there is a paradox that can stem from the fact that many women who suffer from violence today can not – with lockdown, Covid, the economic crisis, even in terms of employment or income – leave their partners, “Piques explained.

Another question is how the number of women killed is calculated and by whom.

Féminicides Par Compagnons ou Ex, a feminist collective that monitors reports of murders of women in the media, tweeted on Tuesday: “When @E_DupondM minimizes #woman death and discounts older and sick women murdered by their husbands (sick emojis) … Know that we never is far behind the official figure [in releasing our count], and therefore we will talk about this again! 2020 -> 100 women killed by a partner or ex ”.

When @E_DupondM minimizes #feminicides and suppresses the elderly and malicious women assassinated by their mari 🤢🤮 Sachez that our account is never far from the official figure, and therefore, we in repairing! 2020➡️100 feminicides by companions or exhttps: //t.co/B83HiLTbV6

Piques agrees that the definitions of femicide vary, which raises questions about the government’s figures. “We really need to go back to the original definition of femicide, which is murder based on sexism, a definition that is broader than homicide. For example, there are cases of murders of couples who do not live together, which do not count; or even cases where a man murders a woman for refusing his progress. Is it a sexist murder or not? These do not count either. So in fact, the definitions vary a lot, she says.

“We must also include the murders of prostitutes, which occur every year. To me, it is a real sexist murder and another example of feminism that does not count, “she added.

Dupond-Moretti’s announcement on Tuesday was the first of its kind by a French justice minister since the ministry requested in 2020 that system reports be sent to the public prosecutor for each domestic murder to offer “a more accurate follow-up” of these murders “to evaluate the effects of The Grenelle Actions “.

“Obviously, additional resources are needed, and we will focus on them,” Dupond-Moretti said Tuesday. Organizations fighting to protect women from violence could no longer agree.