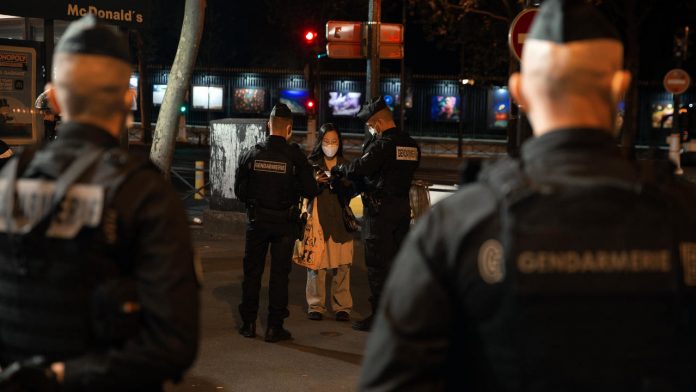 In a first for France, six NGOs filed a class action lawsuit on Wednesday to pressure the French government to address systemic discrimination against police officers who carry out identity checks.

The organizations, including Human Rights Watch and Amnesty International, claim that French police use racial profiling in ID checks, targeting blacks and people of Arab descent.

They served Prime Minister Jean Castex and France’s interior and justice ministers with formal legal notice demanding concrete steps and deep law enforcement reforms to ensure racial profiling does not determine who is stopped by police.

The main lawyer in the case, Antoine Lyon-Caen, said that the legal action is not aimed at individual police officers but “the system itself, which through its rules, habits, culture, generates a discriminatory practice”.

“Because the shortcomings of the state (affect) a systemic practice, the response, the reactions, the actions, the actions must be systemic,” Lyon-Caen said at a news conference with NGOs taking action. They include the Open Society Justice Initiative and three French grassroots groups.

The issue of racial profiling by French police has been around for several years, especially in France’s ethnically diverse suburbs, where men of African and North African descent complain that they are routinely stopped and sought simply because of their skin color.

Anti-racism activists say the coronavirus pandemic has exacerbated inequality, with the same disadvantaged areas accounting for a disproportionate share of fines imposed for violations of France’s lockout and curfew.

Notifying is the mandatory first step in a two-step process. The law gives French authorities four months to talk to NGOs about how they can meet the requirements. If the parties behind the trial are left unsatisfied, the case will go to court, according to one of the lawyers, Slim Ben Achour.

It is the first class action lawsuit against discrimination on the grounds of color or presumed ethnic origin in France. The NGOs use a little-used French law from 2016 that allows associations to take such a legal move.

“It’s revolutionary, because we are going to speak for hundreds of thousands, even a million people,” Ben Achour told the Associated Press in a telephone interview.

The four-month period to reach an agreement can be extended if the talks move forward, he said.

Misuse of identity checks has served for many in France as a symbol of widespread alleged racism within the police force, and critics claim that misconduct has been left unchecked or whitewashed by the authorities.

France saw its biggest protests against racism in decades in the wake of the George Floyd assassination in the United States. © Gonzalo Fuentes, Reuters

Police representatives claim that officers themselves feel attacked when they show up in suburban housing projects. During a series of confrontation incidents, officers got stuck and had fireworks and other objects thrown at them.

NGOs are seeking reforms rather than monetary damages, in particular changes in the law governing identity checks. They claim that the law is too broad and does not allow for police liability because the actions of the officers involved cannot be traced, while the stopped individuals are left humiliated and sometimes angry.

Among other demands, the organizations want to put an end to the long-standing practice of measuring police performance with the number of tickets issued or arrested and argue that benchmarks can encourage unfounded identity checks.

‘When I’m not in uniform I’m a color person’

The trial involves about 50 witnesses, both police officers and people who are subjected to violent checks, whose accounts are extracted in the 145-page warning letter. The NGOs quote an unnamed person who talked about undergoing several police checks every day for several years.

A police officer appointed in a tough Paris suburb who is not connected to the case told the AP that he is often subjected to ID checks in civilian clothes.

“When I’m not in uniform, I’m a colored person,” said the official, who asked to remain anonymous in accordance with police rules and because of the sensitive nature of the subject. The police need a legal basis for their actions. “But 80% of the time they control (based on) someone’s face,” the official added.

Omer Mas Capitolin, head of the Community House for Supportive Development, a grassroots organization involved in the legal action, called it a “mechanical reflex” for French police to stop non-whites, a practice he said harms those in control and ultimately to the relations between officers and the public they are expected to protect.

“When you are always controlled, it lowers your self – esteem” and you become a “second class citizen”, Mas Capitolin told AP. “Victims are afraid to file complaints in this country even though they know what happened is not normal,” he said, fearing fallout from neighborhood police.

He credited the case of George Floyd, the black American who died last year in Minneapolis after a white police officer pressed a knee in the neck, to raise awareness and become a catalyst for change in France.

>> When George Floyd’s revolt spreads, France confronts its own demons

NGOs made it clear that they did not accuse individual police officers of being racist.

“It’s just part of the culture. They do not think there is a problem, says lawyer Ben Achour.