Hundreds protest against corruption and police brutality in Tunisia – 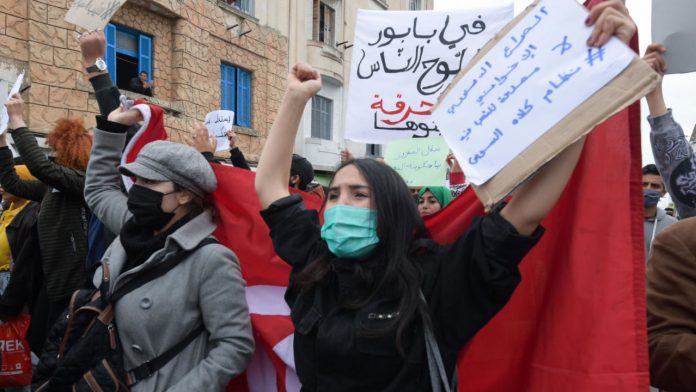 Hundreds of protesters took to the streets of Tunisian cities on Saturday to protest police crackdown, corruption and poverty after several nights of riots and arrests.

Saturday’s protests come as the North African nation fights to stop the new coronavirus pandemic, which has paralyzed the economy and threatened to overwhelm hospitals.

More than 6,000 people have died from Covid-19 in Tunisia, with a record 103 deaths reported on Thursday.

The government on Saturday extended a curfew at night from 8 pm (1900 GMT) to 5 am and banned gatherings until 14 February.

But protesters took to the streets in several parts of the country, including the capital Tunis and the marginalized inner region of Gafsa, to demand the release of hundreds of young people detained for several nights by unrest since January 14.

“Neither the police nor the Islamists, the people want a revolution,” protesters chanted in a crowd of several hundred in Tunis, where one person was injured in brief clashes amid a fierce police presence.

Protests were also held in the coastal town of Sfax on Friday.

Much of the unrest has been in working-class areas, where anger boils over high unemployment and a political class accused of failing to deliver good governance, a decade after the 2011 revolution that overthrew the longtime dictator Zine El Abidine Ben Ali.

Economic misery exacerbated by new coronavirus restrictions in the tourism-dependent nation has driven a growing number of Tunisians to try to leave the country.

“The situation is catastrophic,” said Omar Jawadi, 33, a hotel sales manager who has only been paid half his salary for several months.

“Politicians are corrupt, we want to change the government and the system.”

Police have said that more than 700 people were arrested during several nights of unrest earlier this week who saw young people throwing stones and petrol bombs at the security forces, who responded with tear gas and water cannons.

Human rights groups on Thursday said at least 1,000 people had been detained.

“Young people live from day to day, we no longer have hope, neither to work nor to study – and they call us troublemakers!” said call center worker Amine, who has a degree in aeronautics.

“We must listen to young people, not send in thousands of police. The whole system is corrupt, some families and their followers control Tunisia’s wealth.”

Tunisia last week marked a decade since Ben Ali fled the country during mass protests and ended 23 years in power.