In Russia’s Vladivostok, residents are recovering after an ‘unforgettable’ storm leaves the city covered in ice 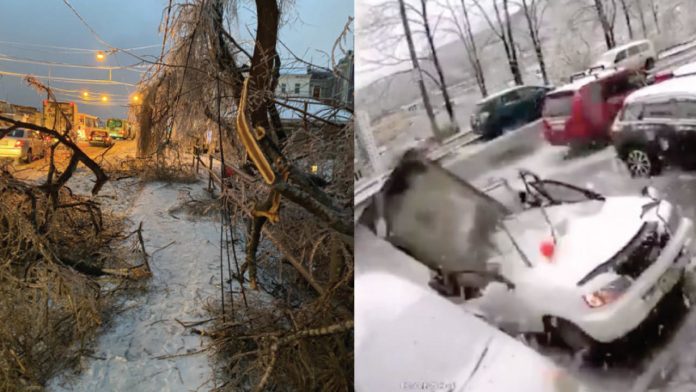 The Russian port city of Vladivostok was hit by a freak-ice storm on November 19, felling frozen trees and power lines and leaving at least 150,000 people without electricity and water. Although most residents have recovered from the force on November 25, the city is still covered in ice, which puts residents at risk.

The freezing rains hit Vladivostok, a city of about 600,000 people, overnight last Thursday after a “cyclone carrying hot air met an anticyclone carrying cold air,” according to local weather services.

Pictures taken in Vladivostok on November 19 by Twitter user Nikita Milkin show ice-laden and fallen trees after the storm the night before.

“In the morning I saw the destruction and chaos near my entrance.”

Nikita Milkin is a music editor and student living in Vladivostok.

When it started to rain on November 19, the rain looked normal. But because of the cold [Editor’s note: down to -5°C]everything freezes immediately. In the morning I saw the destruction and chaos near my entrance. All the trees were cracked and had fallen on the road and on cars. In our area, electricity and Internet were turned off for the evening. The next day the lights were on, but there was no internet for 6 days. Some areas like Churkin went without electricity or heat for several days.

In the midst of a lack of power and freezing conditions, the Primorsky region declared a state of emergency. Pictures on social media reveal the extent of the damage.

On November 19, a video that is widely circulated on Russian social media shows a resident of Vladivostok cleaning ice from his car, when he crowdedly holds a concrete slab that suddenly falls from above and smashes the vehicle.

Pictures taken by Nikita show a road covered in ice with a broken tree standing overhead and a frozen, broken car. © Nikita Milkin

Transportation in Vladivostok stopped and flights and trains were delayed, including the Trans-Siberian Railway, which connects Vladivostok to Moscow. According to local weather services, the ice was 12 millimeters thick in some areas – a phenomenon the region had not seen in 30 years.

At least one person froze to death in the aftermath of the storm, reported The Siberian Times, an English-language newspaper covering the Siberian region.

Vladivostok residents managed the elements as their city gradually recovered

As the city worked to restore power, Nikita said residents and the local government worked together to clean the streets and provide necessities for those in need:

The inhabitants managed the elements. We were looking for volunteers to clean the roads of snow and ice. We organized a field kitchen and distributed free water, gas bottles and porridge.

The city is also handling the situation. Snow plows clean the streets and employees of the city housing department and the regional administration help solve problems.

It has not rained again since, but the storm causes a lot of snow and danger on the roads. We have ice falling from the roof right now. If you have to go somewhere, you have to look up. This is the first time I have seen such an anomaly in Primorsky Krai! [Editor’s note: the federal subject of Russia in which Vladivostok is located.]

This video, sent to us by Twitter user Alexander Masanin, shows his son breaking a veil of ice that covered their car in the aftermath of the storm.

On the evening of November 25, almost all areas of Vladivostok had recovered power, including Churkin, where many residents went without electricity, heat and water for 5 days. But thousands remain without power, especially residents of Russky Island, which lies across the Russky Bridge from Vladivostok.

Alexander Masanin, who works for a trading company in Vladivostok, said the last few days were “unforgettable”.

Vladivostok is one of the southernmost points in Russia, so ice storms like this are very rare. It’s really a shame for the trees, most of which have broken branches. And because of the ice, there is no food for birds and animals. We did some feeders, but it does not help much.

The ice storm was not the only natural disaster that hit Vladivostok this year. In early September, the city was also hit by Typhoon Maysak, a destructive cyclone that killed at least three people and left 150,000 of the Primorye region’s residents without power.

In an interview with the Moscow Times, an English-language online newspaper, Roman Pukalov, head of environmental programs at the Green Patrol NGO, said the ice storm was a direct result of exceptionally warm temperatures in the Primorye region this autumn. “While temperatures typically hit 0 ° C in early October, [this year] temperatures dropped just below zero and brought with them this icy rain. Last year, Vladivostok also experienced a mild and abnormally snow-free winter.

But other researchers hesitated, saying that a single weather event could not be attributed to a single specific cause.

Prime Minister Mikhail Mishustin has ordered the establishment of a working group to combat the consequences of the ice storm, which will be led by Alexei Chekunkov, Minister for Development of the Far East and Arctic.