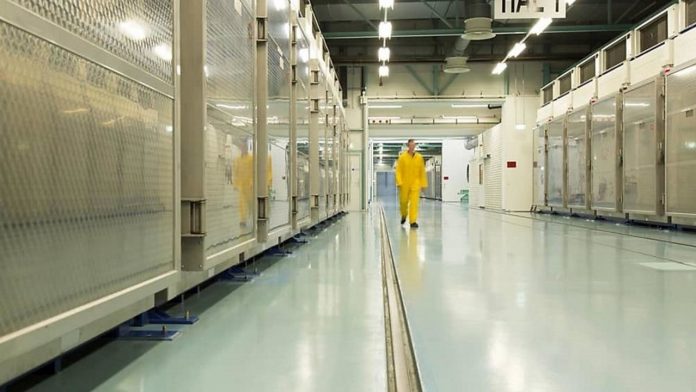 Iran on Monday said it was beginning to enrich uranium up to 20% purity at its Fordow plant, in its biggest breach of the 2015 nuclear deal threshold, as state media acknowledged that Tehran had seized a South Korean-flagged oil tanker in the Strait of Hormuz.

The move follows the approval of a bill last month by the Conservative-dominated parliament “to lift sanctions and protect the interests of the Iranian people” and mandate the Rouhani government to “produce and store 120 kilos (265 pounds) per year of enriched uranium to 20%”.

The law also calls on the administration to end UN inspections of Iran’s nuclear facilities, if the remaining parties to the deal – Britain, China, France, Germany and Russia – do not facilitate Iran’s oil sales and guarantee the return of revenues.

The announcement came as Tehran on Monday confirmed that the Revolutionary Guards had seized a South Korean-flagged oil tanker in the Strait of Hormuz due to “environmental hazards”.

“This tanker carried a South Korean flag and was seized due to oil pollution and environmental hazards,” the Fars news agency and other local media reported.

Satellite data from MarineTraffic.com showed MT Hankuk Chemi outside the port of Bandar Abbas on Monday afternoon without explanation. It had traveled from Saudi Arabia to Fujairah in the United Arab Emirates.

# Iran’s IRGC officially confirmed that its fleet seized the South Korean tanker “China Hankok” this morning for polluting environment. The ship was on its way from the port of Al-Jubail in Saudi Arabia to South Korea and was transporting 7,200 tons of ethanol. # SouthKorea pic.twitter.com/Dk1bDSb2OL

‘Israel does not allow Iran to produce nuclear weapons’

The double incidents came amid heightened tensions between Iran and the United States during the waning days of President Donald Trump’s term, which saw US leaders unilaterally withdraw from Tehran’s nuclear deal with world powers and trigger months of escalating incidents between the two countries.

Iran’s decision to start enriching at 20% a decade ago almost led to an Israeli strike against its nuclear facilities, tensions that only eased with the 2015 nuclear deal. A resumption of 20% enrichment could see brinksmanship return as that level of purity is only a technical step away from 90% weapon levels.

In a statement, Netanyahu said Iran’s enrichment decision could only be explained as an attempt to “continue to pursue its intention to develop a military nuclear program”. He added: “Israel does not allow Iran to produce nuclear weapons.”

Israel does not confirm or deny reports of its nuclear weapons program and is generally considered to have its own program.

Tehran began violating the 2019 agreement in response to Trump’s withdrawal from the 2015 nuclear deal in 2018 and the reintroduction of US sanctions that had been repealed under the agreement.

The main purpose of the agreement was to extend the time that Iran would need to produce sufficient fissile material for a nuclear barrier, if it chose, to at least one year from about two to three months. It also lifted international sanctions against Tehran.

Iran’s decision comes weeks before US President-elect Joe Biden takes office on January 20, and the move is widely seen as a pre-inauguration tactic. Biden has said he is willing to resume the nuclear deal.

In Brussels, a spokesman for the European Commission said that Iran’s announcement of uranium enrichment, “if confirmed, would constitute a significant departure from Iran’s commitments”.

“All participants are interested in keeping the deal alive. The deal will be kept alive as long as all participants keep their commitments,” the spokesman said.

The head of the International Atomic Energy Agency will brief members on Monday on developments in Iran, the IAEA said, following the announcement from Tehran.

The EU said it would wait for information from the IAEA chief to EU countries before commenting further.