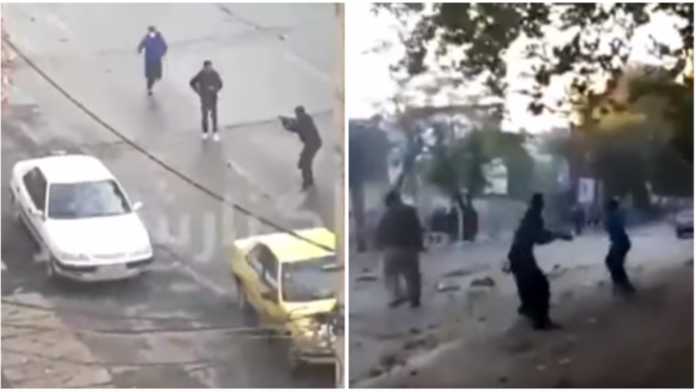 Between 15 and 18 November 2019, hundreds of people were killed in Iran when the government received protests triggered by an increase in petrol prices. The government shut down telephone lines and Internet access, but hundreds of videos surfaced showing uniformed soldiers and police firing unarmed civilians. The observer team reviewed more than 750 amateur videos and photos focusing on the images that showed shots and injuries.

UPDATE 23/12/2020: We are pleased to announce that our journalist Ershad Alijani was awarded the French Diplomatic Press Association’s 2020 Prize for this report. He awarded the prize to “the brave Iranian citizens who risked their lives to document what was going on.”

When the protests spread to cities across the country on November 16, the government implemented what the monitoring group NetBlocks called “an almost total shutdown of the Internet”.

A man who had joined the protests in Shahriar, a working-class suburb of Tehran, told observers: “I took lots of photos and videos, but the Internet was turned off so I could not share them online. In the end, I had to delete them because the police stopped people on the street and checked their cell phones. ”

Despite the government’s efforts, hundreds of videos and photos circulated extensively during and after the Internet shutdown, especially on Telegram, the messaging program popular in Iran.

“As always on social networks, the images circulated with little or no information,” said Ershad Alijani, editor of the Observers website in Persian. “People did not know where or when they were taken.”

This excerpt from an amateur video (above) shows when a heavy machine gun on a pickup shoots into a swamp in Chamran, Iran on November 18, 2019.

This image (above) shows the location of the pickup, the camera that was filmed, and the swamp. According to a December 1 report by the New York Times, troops from Iran’s Islamic Revolutionary Corps (IRGC) fired on protesters who had sought refuge in the swamp on November 18, killing 40 to 100 people.

The observer team focused on four cities and towns: Shahriar, near Tehran; Sadra, near Shiraz; Marivan in the west; and Mahshahr on the Persian Gulf. Using geolocation techniques cross-referenced with first-hand accounts from within Iran, observers identified the exact location – to within five meters – of three dozen videos showing uniformed men shooting and civilians being injured and killed.

Amnesty International has documented at least 304 deaths during the protests, according to their latest report published on December 16. On December 23, Reuters said about 1,500 people were killed within two weeks – a number they said were given to them by high-ranking Iranian officials.

See the report in 15 minutes: