Is this video of a nurse fainting proving that the Covid-19 vaccine is dangerous? – 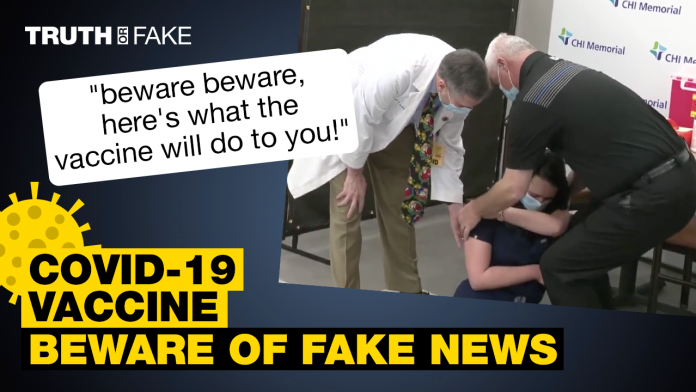 Incorrect information about the Covid-19 vaccine circulates a lot online, even though many countries have started vaccinating their populations. A video that was shared publicly shows an American nurse fainting after receiving the Covid-19 vaccine. Some social media users have seen this video as evidence that the vaccine is dangerous. But watch out for false claims.

Since December 17, social media users have shared a video showing a young American nurse receiving the vaccine and then collapsing as she talks to journalists about her experience.

“Hello everyone. Warning, warning – look at the effect of the coronary vaccine,” reads the text in French on this video which shows the scene from several different angles.

This post, written in French, says: “Hello everyone. Warning, warning – look at the effect of the coronary vaccine. “This is a screenshot of a post from December 19th. © DR

Another version of the video published on Twitter has received more than 370,000 views and many repeat the idea that this proves how dangerous the vaccine is.

“Here is a young woman marketing the vaccine she just received. Look what happens to her … I do not know what they put in it but @olivierveran will tell us (sic)”, wrote a French user of social media that tagged the French. Minister of Health, Olivier Véran.

Several other posts claimed that the nurse actually died.

So what’s the real story behind this video? In the movie, you can see the name of the CHI Memorial Hospital, located in Chattanooga, Tennessee, USA. With this information, it’s easy to find the videos in a video that will be livestreamed on Facebook by the local TV channel NewsChannel 9 on December 17.

According to the Associated Press, nurse Tiffany Dover was one of the first five people to receive the Pfizer-BioNTech Covid-19 vaccine at the hospital. She first appears at 8:42 in the Facebook video. She sits on a chair and then gets her vaccine at 9:31. Then some of her co-workers talk to the assembled journalists about their experience of getting the vaccine. Dover starts talking about his experience in about 25 minutes. But just as she starts talking, she faints and the video ends.

While the video is real, this movie does not prove that the vaccine is dangerous. In the caption to the video, NewsChannel 9 wrote:

During our live stream, one of the nurses who talked to us about making the vaccine start to feel dizzy and faint. Thankfully, a doctor was there to catch her.

According to the CDC, this is not uncommon. The CDC says that fainting can occur after many types of vaccinations and is often triggered by pain or anxiety.

The nurse also said that she has a condition where she often faints when she feels pain, so it was not a surprise to her that it happened.

However, the social media users who shared this video did not share this context. The nurse recovered quickly after fainting and explained to reporters that she has an overactive vagal response, a condition that makes her faint when she feels pain. This means that even a small pain such as “sticking your toe” can make her faint.

“It’s normal for me,” she said, adding that she did not regret receiving the vaccine.

In an interview posted by the hospital on Twitter, Jesse Tucker, medical director of critical care medicine at Chattanooga Hospital, said there was nothing to worry about:

“It’s a reaction that can happen very often with any vaccine or shot,” he said. “No reason to suspect that it is due to the vaccine at all.”

The US Food and Drug Administration (FDA) analyzed the results of the clinical trials with Covid-19 vaccine conducted by the manufacturer Pfizer-BioNTech. The most important side effects for patients are fatigue, headaches, chills, aches and fevers, according to an FDA document from December 10.

>> READ ABOUT THE OBSERVATION:

1. No, this video does not show a man fainting after taking the Covid-19 vaccine

2. No, these women were not ‘vaccinated twice’ against Covid-19

3. Were there really four people who got facial paralysis after receiving the vaccine?

4. Did celebrities and politicians just get the Covid-19 vaccination?

Do you doubt something you have seen circulating on social media? Do not hesitate to contact the JowharObserver team via email (observateurs @ france24), on Facebook or on Twitter.