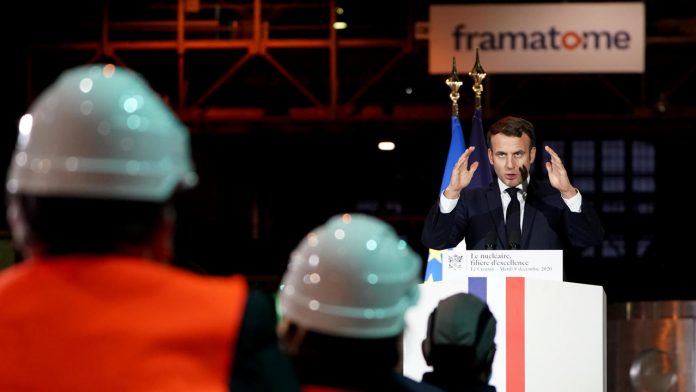 Nuclear power will remain an important part of France’s energy supply, President Emmanuel Macron said on Tuesday in a show of support for industry even as he looks to reduce the dominance of nuclear power as a power source.

France has said it will reduce its dependence on nuclear energy to 50% from 75% by 2035 and has not yet made a final decision on whether to build the next generation of EPR nuclear reactors.

It depends on 2023, at what time the state-controlled tool EDF’s Flamanville 3 EPR project should be up and running, but Macron said he wanted to put a lot of pressure on preparations next year.

“The preparatory studies on the design of new reactors are important and I want them to continue and be packaged in the coming months,” Macron said during a visit to the nuclear component manufacturer Framatome, part of EDF.

EDF, which has been plagued by delays and cost overruns on existing projects, has already said it plans to unveil a new, cheaper-to-build version of its EPR nuclear reactor by mid-2021.

Macron still signaled broad support for the industry, although he flagged the need to move more towards renewable energy. He said France’s next-generation aircraft carriers would be nuclear-powered.

# France’s new aircraft carrier will be nuclear-powered, President Macron has announced and is likely to reach 75,000 tonnes, slightly larger than QE-class vessels and without STOVL restrictions. They will wear Rafale and then a navalized version of # FCAS / # SCAF pic.twitter.com/z8ZrUA4uAj

“The nuclear industry will remain the cornerstone of our strategic autonomy,” Macron said.

Some environmental campaigns have succeeded in this policy, with Greenpeace calling nuclear energy a “false solution” to climate change problems and saying that it entails costs that can be better spent on cleaner solutions.

France is the only nuclear power in continental Europe. Britain is also a nuclear power, but its relationship with the European Union – from trade to security – when it leaves EU circulation on 1 January is still uncertain.