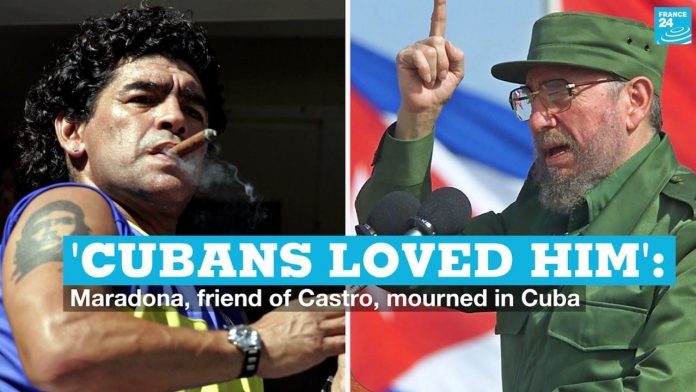 From Argentina to Naples, Diego Maradona’s death has been mourned by football fans around the world, including in Cuba where he is best remembered as a great friend of former leader Fidel Castro, a man Maradona once said was like a “second father” for him.

The two first met when Maradona visited Cuba in 1987, after Argentina’s victory in the 1986 World Cup, and several more visits followed.

Their friendship deepened when Maradona spent four years in Havana in the early 2000s being treated for drug abuse, and when Castro died in 2016, Maradona paid a heartfelt tribute.

“I feel Cuban, they have given me a lot of love during my illness and the fact that today I can get up every morning and I can play sports, I can talk to you, with my brothers or I can do an interview, I am very guilty Fidel, he said.

In a fatal death, Castro died on November 25, the same date as Maradona, a coincidence that has not gone unnoticed by the people of Cuba.

“The Cuban people feel the loss of the great football, Diego Armando Maradona. Just on a day like today, [anniversary of the] “The death of our commander Fidel Castro,” Havana resident Luis Perez told Reuters. They are united … two big ones, one from football and one from the Cuban revolution. “

Click on the player to see the full video.