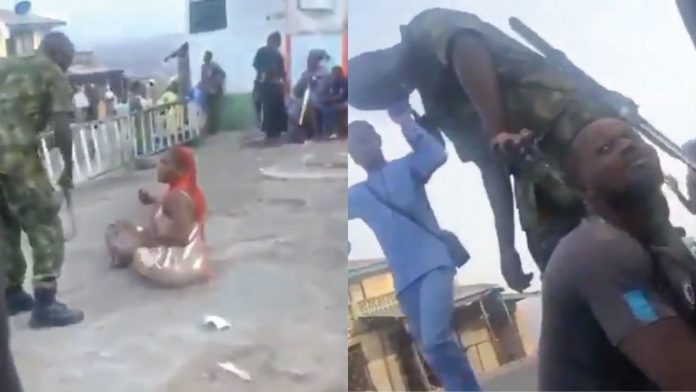 Viral images posted on Twitter on November 1 and 2 show Nigerian military officials attacking civilians in the Beere area of ​​Ibadan: whipping a woman for “decent attire” and forcing the hair of at least six men to be cut while taking their money. Government officials in Oyo claim they have arrested the soldiers in charge.

On November 1, a few days after SARS protests against police brutality were pending in Ibadan, the capital of Oyo State, Nigerian soldiers from Operation Burst (a joint security team deployed by Oyo State Governor Seyi Makinde to protect protesters from violent villains) attacked civilians in Beere for reasons that are still unclear.

@seyiamakinde, I do not do this oo, but I will do … Operation busrt u distributed to Beere / Mapo only abuses its power. Why the hell do you choose to grill my hairstyle that is not even full or too much. Sir with all due respect I can not take it. That’s all wrong sir pic.twitter.com/uIuzdbSfW9

This post on November 1 shows pictures of Twitter user Ojo Oluwatobi’s hair after he was harassed by Operation Burst military officers.

Deji, a man forced to cut his hair by a military officer, shared his story with Jowharobservers.

“Before I could say anything, I felt that the cold steel of the scissors parted my hair” It was 6 pm and I was going to work. When I got to the bus stop, I heard a military man on the other side of the road say, “Hey, you, come on.” He ordered me to sit on the floor and said that he must cut my hair and that I will pay him for the service rendered.

I knew it was a serious matter, even though I had not committed any crime. I started begging him and said I did nothing and had no money to pay for his so-called hairstyle. He got angry and said he would urge his fellow soldier to hit me if I continued to argue. Military men in Nigeria do not respect your fundamental human rights, so I had to obey. During this time, he also stopped another guy and ordered him to sit on the floor to get his hair cut.

He ruined my hairstyle. As if that was not enough, he ordered me to take off my shoes, squat and do ten frog jumps. At that moment, I almost cried. In the end, he did not take money from me, but I’m sure he was trying to collect money from the other guy he stopped.

When he released me, I asked for a nearby hairdresser to remove the debris he left on my head. I heard people say “so they lost yours too, they’ve been doing it since tomorrow.

This November 1 Tweet shows pictures of Deji at the hairdresser and a picture of his hair right after it was cut by the military officer.

After Deji posted about his abuse on Twitter, he started seeing posts about similar violence that day. A video posted on Twitter on November 1 showed a soldier whipping a woman for “decent attire” outside what appears to be a gas station while others are watching.

On November 2, another video was published in which soldiers cut a man’s hair.

Given the similarity between the buildings in the background, both abuses appear to have taken place in the same place – according to Deji, a petrol station near Beere’s main bus stop on the Orita Aperin-Beere road. Deji confirmed that he also met the officer at the same place.

At least three people tweeted about being assaulted in Beere on November 1. The user PrimalHubLtd wrote in a Twitter thread that he would return from church when military officers accused him on the street, cut his hair and forced him to pay 500 Naira (1.11 euros).

Hi Nigerians, it seems @HQNigerianArmy are really confused. I am here 2 parts my trial in the hands of the Nigerian army today on my way to come 4rm church at the bodija area in Ibadan where I had to pass the Beere axis where the operation blew up according to the directive from Gov @Seyimakinde stationed. pic.twitter.com/KNbcGdduIP

“Harassment, extortion, brutalization and killing of innocent civilians by the armed forces is not new. Police and SARS brutality is the order of the day, but military brutality is rare and not an everyday occurrence. Haircuts are new in recent years, especially here in Ibadan. We had some cases 7 to 8 years ago. ”

The Nigerian army has not responded to requests from Jowharobservers.

“Abuse of power sometimes comes into play, especially when military officers are rotated.”

France 24 observer teams spoke to Dr. Jumo Ayandele, a researcher specializing in African military and counter-terrorism, said a number of factors, including professional privileges and officer training, could help explain the attacks.

“When it comes to the Nigerian military, officers are really put on a pedestal. So many recruits are hired not because of patriotic duty, but for the service job and for the privilege of being a soldier over a civilian. This is why abuse of power sometimes occurs, especially when military officers are rotated.

We must also consider whether these troops were sufficiently trained to respect human rights and humanitarian interventions, and how this affects how they interact with civilians. There are varying degrees of professionalism between the three branches of the Nigerian military. The Air Force is seen as more professional – you would not hear of any acts of violence against civilians from them or from the navy. But you actually hear about incidents kept by the Nigerian army.

The military has long sought to change its image of protecting society, for example with the Nigerian army’s transformation agenda [Editor’s note: implemented from 2010 to 2014]. However, I am not aware of newer campaigns. ”

In a Twitter post on November 2, Seun Fakorede, the commissioner for youth and sports in the state of Oyo, reported that Captain Usolo, commander of the Operation Burst team, acknowledged the allegations against his officers in Beere. An officer named Adesina was identified as the man filmed with a woman in the video above. Mr Fakorede also wrote that the commander “apologized to the families of those attacked by the wrong officers”.

Mr Fakorede then claimed that “the men involved in this distasteful operation have been arrested and taken to the barracks. This [incident] will not repeat itself in the state of Oyo. ”

My ears are filled with news of the illegal activities of some Nigerian Army soldiers over the weekend.

France’s 24 observers contacted Mr Fakorede and Kazeem Bolarinwa A., another government official, who tweeted about the incident. Neither the arrests nor the charges against the soldiers have been substantiated.

“It’s one thing to come out and talk to people, and it’s another thing to fulfill the promise. The current state governor of Oyo has tried. He says they will be brought to justice, but what about responsibility? Maybe we should keep our fingers crossed for justice. ”