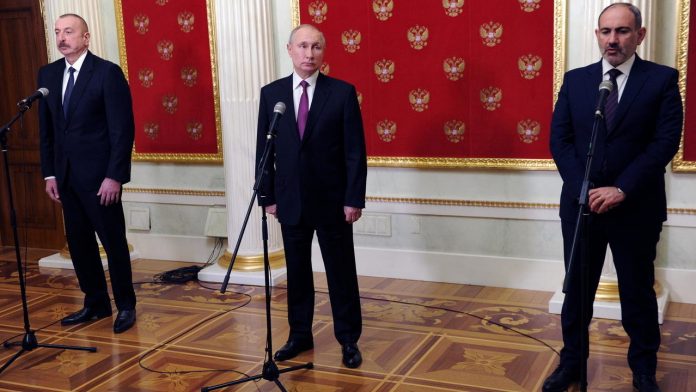 On Monday, Russian President Vladimir Putin gathered the leaders of Armenia and Azerbaijan for the first time since a war last year over the Nagorno-Karabakh region, in an attempt to solve problems that could undermine the deal that ended the conflict.

A ceasefire agreement in Russia in November halted the six-week conflict between Azerbaijani and ethnic Armenian forces, which locked in Azerbaijan’s territorial gains.

But tensions remain, with sporadic violence at low levels, prisoners of war still held by both sides and ambiguity about how a potential transport corridor through the region will work.

Putin said the ceasefire agreement, in which Moscow deployed peacekeepers, was implemented without serious incidents and that talks had been useful.

“We could agree and sign a joint declaration on the development of the region,” he said. “I’m talking about concrete steps to build economic connections and develop (transport) infrastructure projects.”

Armenian Prime Minister Nikol Pashinyan said it was not possible to mediate the exchange of remaining prisoners.

But he, and Azerbaijani President Ilham Aliyev, noted progress in other areas, with both positive economic and infrastructure prospects.

Aliyev said his country would have a rail link for the first time in more than three decades with Nakhchivan, an Azerbaijani exclave bordering Turkey and Iran, and that landlocked Armenia, via Azeri territory, would have rail links with Russia and Iran.

The atmosphere at the conversations was frosty. Pashinyan and Aliyev did not shake hands but exchanged short greetings as they sat in the Kremlin opposite Putin.

Nagorno-Karabakh is internationally recognized as part of Azerbaijan, but ethnic Armenians and Azeris consider it both part of their historic homelands and fought a much larger war in the 1990s that left tens of thousands dead.

For Russia, the recent conflict highlighted the growing influence of the close Azerbaijani ally Turkey in the South Caucasus, an area that Moscow traditionally sees as its own influence.

But by brokering the deal and getting Russian peacekeepers on the ground, Putin has counteracted a stronger Turkish presence at the moment while expanding Moscow’s own military footprint.