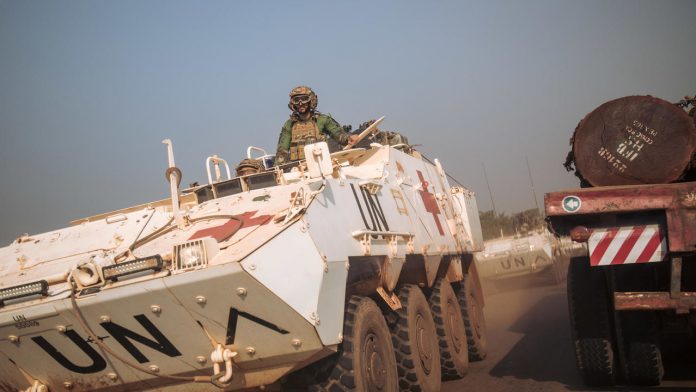 Rebels in the Central African Republic arrested Bambari, the country’s fourth largest city, on Tuesday, when clashes broke out on a major highway in the western part of the country five days before nationwide elections, sources told AFP.

The attack follows the government’s accusations over the weekend that former President Francois Bozize tried to carry out a coup with armed groups ahead of the upcoming elections.

At CAR’s request, Russia and Rwanda have sent military personnel to support the troubled country.

“The city is under the control of armed groups,” said Bambari Mayor Abel Matchipata, while a senior government official confirmed “they are in the city, we are waiting for reinforcements, which are on the way.”

Bambari is located 380 kilometers northeast of the capital Bangui.

The attack, which began at 10 a.m., triggered a two-hour firefight with CAR troops and the UN peacekeeping force MINUSCA, according to sources in NGOs and the UN.

“There has been no violence against the locals, but they have ransacked the police station, the gendarmerie and people’s houses,” said Matchipata.

Sources said the rebels were led by an armed group called the Unity for Peace in Central Africa (UPC), one of the militias fighting the government in the run-up to the December 27 polls.

On Saturday, the government accused three militias of arriving along important highways towards Bangui. MINUSCA said late on Sunday that the advance was stopped and in some places pushed back and the situation was “under control”.

But fighting broke out between armed groups and CAR forces on Tuesday afternoon on a major road in the western part of the country that connects Bangui to Cameroon, according to senior UN officials.

A convoy of commercial trucks traveling under MINUSCA escorts was blocked on the route by the Central African Armed Forces, an AFP journalist saw.

The news sparked fear in Boali, about 60 kilometers from the capital and not far from the clashes.

According to the men who remained in the city, women and children left their refuge in the bush several kilometers away.

CAR is one of the poorest and most unstable countries in the world and has experienced only rare moments of peace since it became independent from France in 1960.

The presidential and legislative elections have been gripped by tensions between President Faustin-Archange Touadera and a mosaic of armed groups that grew up after the country erupted into conflict in 2012.

Touadera is leading the vote, but his government owns only a third of the country.

Russia announced on Tuesday that it had sent 300 military instructors to CAR at Bangui’s request to “train military personnel in the national army” under an existing cooperation agreement.

It had previously distributed 175 military instructors to CAR, according to official figures.

The Kremlin has led a diplomatic and economic offensive in CAR since 2018 in exchange for concessions to Russian companies to exploit their mineral wealth.

The deployment was confirmed by Rwandan President Paul Kagame, although he did not provide details on figures.

Thousands of people in the mainland have died since 2012, and almost a quarter of the population of 4.7 million have fled their homes.

The chief prosecutor of the International Criminal Court, Fatou Bensouda, demanded “calm and restraint” on Tuesday before the election.

“Anyone who commits, orders, encourages, encourages or otherwise contributes to the commission of crime” would be liable to prosecution either by Bangui courts or by the ICC, Bensouda warned.