Sorrow, shock and tributes when the world mourns Maradona 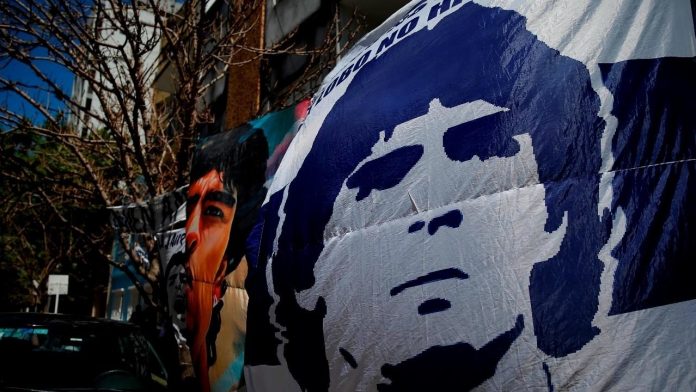 Tributes poured in on Wednesday as the world reacted to the death of Argentine football star Diego Maradona at the age of 60, with footballers, coaches, club owners and politicians praising one of the game’s greatest players ever.

Here are some of the reactions to his death:

Pele: ‘I hope we will play football together in heaven’

Brazilian footballer Pele posted a message on Instagram minutes after the news of Maradona’s death broke.

“Sad news today. I have lost a dear friend and the world has lost a legend,” said Pele, 80, on Instagram, along with a picture of Maradona lifting the 1986 World Cup.

“There is much more to say, but now God can give his family strength. One day, I hope, we will play football together in heaven.”

The Italian football club Napoli, where Maradona played 1984-1991, issued a statement calling his death a “devastating blow” to both city and club.

“We are in mourning. We feel like a boxer who has been beaten. We are in shock.”

“Always in our hearts. Ciao Diego.”

Lionel Messi paid tribute to his fellow Argentine players and called him “eternal” on social media.

“A very sad day for all Argentines and football,” Messi wrote on Instagram. “He has left us but he will never leave us because Diego is eternal. I will keep all the beautiful moments I lived with him and would like to send my condolences to all his family and friends. RIP.”

Instagram | Leo Messi: A very sad day for all Argentines and football. He leaves us but does not leave, because Diego is eternal. I take all the sweet moments I lived with him and wanted to take advantage of sending condolences to his entire family and friends. RIP pic.twitter.com/uHSFt6NhCo

Messi and Maradona have often been compared in the debate over who was the greatest football player of all time.

Both players are icons in Argentina and have been compared to each other due to their global status, dribbling style and famous jerseys number 10.

Zidane: ‘He will live on on every football pitch in the world’

“When they tell you Diego has left, you say it can not be but I have no doubt that he will live on in all the football fields in the world. He was and is the best,” said Real Madrid coach and former France star. Zinedine Zidane.

“At some point the best player of my generation and without a doubt the greatest ever. After a blessed but troubled life, hopefully he will finally get some comfort in God’s hands. #RipDiego,” Lineker said on Twitter.

Reports from Argentina that Diego Armando Maradona has died. By far the best player of my generation and without a doubt the greatest ever. After a blessed but troubled life, he will hopefully finally get some comfort in God’s hands. #RipDiego

The former Englishman later retweeted a video of him meeting Maradona again in 2006, noting “Always a joy to be in his company.”

Platini: ‘Some of our past has passed’

French footballer Michel Platini said “some of our past has passed” after hearing the news of Maradona’s death.

“I’m very sorry. I’m nostalgic for what was a wonderful era,” Platini, who played for France in the 1980s and played for Juventus against Maradona’s Napoli, told French radio station RTL.

“Diego left a mark on my life.”

Argentina Football Association: ‘You will always be in our hearts’

“Argentina’s football association, through its president Claudio Tapia, shares its deepest pain over the death of our legend, Diego Armando Maradona. You will always be in our hearts,” said a Twitter message.

“Thank you dear Dieguito for your friendship, for your football, sublime, without comparison. Simply the best football player in the history of football. So many nice moments together. Impossible to say which was the best. RIP my dear friend,” said Maradona’s former Argentina teammate on Twitter.