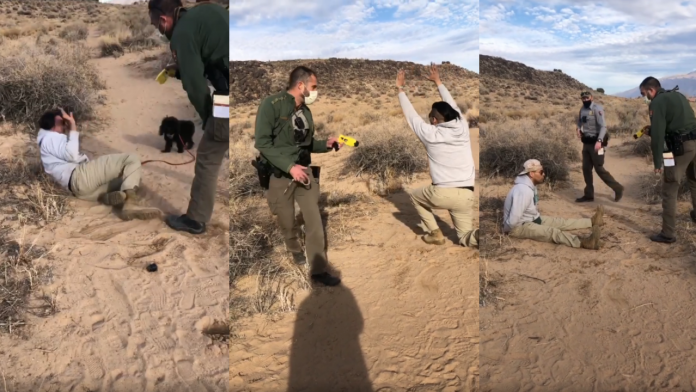 A video shared widely on social media shows a park ranger using a stun gun on an Indian man on December 27 at the Petroglyph National Monument in Albuquerque, New Mexico. The man was accused of going off the track in the park and failed to show identification for the park’s ranger. The video has inspired outrage on social networks when users question the park ranger’s use of force.

Darrell House, who identifies as Navajo and Oneida Native American, visited the park and walked his dog with his cousin at the Petroglyph National Monument when he said he stepped off the trail to keep his distance from an approaching group of hikers.

The Petroglyph National Monument is a federal park with thousands of historic Pueblo rock carvings, which have significant cultural significance for Native American tribes.

“I go there to pray. I bring my sage. I make my prayers. I harvest dirt from the area for ceremonies, House told the KOB4 news in Albuquerque.

While off the road, a park ranger approached him and his cousin and tried to gather their information to file a warning for being off track, which violates park rules to protect the site’s historic artifacts and natural ecosystems. In body camera footage of the incident, the park ranger can be seen approaching the two hikers to talk about “off-trail stuff” before asking them for their name and date of birth.

“I do not want to identify myself,” House said in this video taken on December 27, before being told by a park ranger.

In the bodycam film from the incident, the park ranger explained to House that the petroglyphs are sacred to a number of tribes and that he intended to prevent ongoing vandalism. House then identified himself as an Indian.

House walked away from the ranger, refused to give his name and apologized for being off track. When he tried to move back to the track and continue walking, the ranger tells him that he would be detained for failure to provide identification. When House turns to get away, the ranger takes his stun gun from the holster.

In a video published on Instagram on December 27, a park ranger is seen putting his taser on an Indian walking his dog on the trail.

In the video above, which the House’s cousin started recording moments before he was bottled, we can see House screaming for help while the ranger points a stun gun at him. After being dropped, House continues to scream and tries to move away from the ranger, asking him to stop, while the ranger repeatedly asks him to show his hands. House replies, “I have nothing.”

From the angles shown in both the ranger’s body camera recordings of the event and the video shared online, we can see that the House’s hands were up and visible to the majority of the interaction. No weapons were found at the House after the interaction.

The park ranger tried to handcuff the house several times until another ranger arrived at the scene. This second ranks handcuffs while the first continues to aim a taser at him. House asks them why he is arrested, to which the rangers answer that he will only be detained for a short time.

“I did not feel the need to identify myself because I did absolutely nothing wrong,” House wrote on Instagram after the incident. “I am traumatized. My left leg is them and is still bleeding. ”

According to a statement from the National Park Service (NPS), which manages the park, House and his cousin were seen climbing on rock carvings, or carved rock properties, in the park. According to House, he only left the path short to perform prayers near the rocks.

Several park associations, domestic rights groups and local government have condemned the ranger’s escalation and use of force to police an Indian on ancestral land. According to the Utah Diné Bikéyah nonprofit, which works to protect culturally important lands for Native Americans, House’s rights may have been violated under the American Indian Religious Freedom Act, which gives Native Americans access to sacred sites, many of which are on public land to practice traditional religious practices.

According to a statement from Ernie Atencio, Southwest Regional Director of the National Parks Conservation Association:

The ranger’s failure to step down the situation and his excessive use of force on a park visitor in a routine meeting is shocking and not the behavior we expect from our national park rangers. […] Every place in the National Park System is in the ancestral Indians. This park was specially designated to protect indigenous shrines and has always allowed access for traditional ceremonial activities.

According to the National Parks Service, the organization works to ensure that tribes and tribe members have full and appropriate access to their sacred sites.

After the incident, native groups organized a prayer walk in protest and demanded that the park ranger be fired.

Both House and his cousin were quoted as being off-trail and giving false information to officers, and could be fined. The incident is currently under investigation by the National Parks Service.