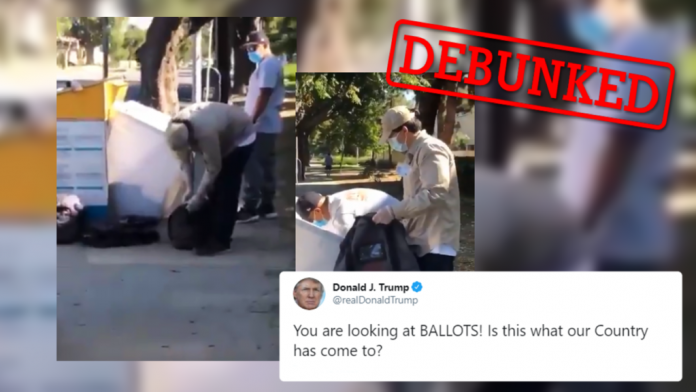 US President Trump, who lost the US presidential election on November 3, tweeted a video on November 11 that he suggested showed that polls recently found in California – as such had not been counted. It turns out, however, that the video shows the normal procedure for collecting ballot boxes.

On November 11, Donald Trump tweeted a video that received seven million views in half a day and was shared more than 113,000 times. The video shows a woman filming two men collecting postal votes from a designated dropbox.

The woman who films turns to the men who pick up votes directly:

Woman (filming): “Election votes?” Man: “Yes.” Woman: “I thought they had gathered them all. I just wanted to document. Man: “No, we’re still collecting. “Woman:” But wait, how come they have already called the state? “Man:” Because this is a submission choice. “Woman:” Is there a lot in there. Man: “Yes. “Woman:” Are you official election guys? “(The man shows her his mark.)” Where are you taking them? ” Man: “The polling station.” Woman: “Is it in the government building?” Man: “LA County.” Donald Trump posted this captioned video, “You are watching BALLOTS! Is that what our country has come to? “, Which suggests that these votes had not yet been counted at the time of the post, 11 November.

What does this video really show?

This video is not new. It was already circulating online on November 4 by people who were surprised to see polls collected from a mailbox the day after the election. It was filmed in Reseda, California, a traditional democratic state. The media reported that the state had gone for Joe Biden on the evening of November 3.

Fact-checking website Politifact explained that this video did not show anything unusual, referring to the Twitter account in LA County, which explained that these ballot boxes were closed at 8 pm on election day and that the polls would be collected the next day.

“These are valid votes that will be processed and counted during the election after the election – like all outstanding votes with postal votes,” the tweet explains.

All drip boxes were closed and locked at 8 pm on election night and votes were collected the next day. These are valid votes that will be processed and counted during the election after the election – like all outstanding votes with postal votes.

The procedure shown in this video is standard practice. On November 12, Joe Biden led with about 96 percent of the vote in California with 64.2 percent, or 10.3 million votes, compared to 33.7 percent for Donald Trump, or 5.4 million votes.

Cases of election fraud are that the United States is extremely rare in part because of the strict security controls involved in the normal process, the two experts we interviewed explained for the article below.